As oceans absorb more carbon dioxide, they are becoming increasingly acidic and shifting the delicate balance that supports marine life. How species will cope with ocean acidification and the other consequences of global climate change is still very much unknown and could have sweeping consequences.

Researchers from the University of Washington School of Aquatic and Fishery Sciences have discovered that ocean acidification impacts the ability of some oysters to pass down “memories” of environmental trauma to their offspring.

The two papers were published in December in Ecological Applications and the Journal of Shellfish Research. 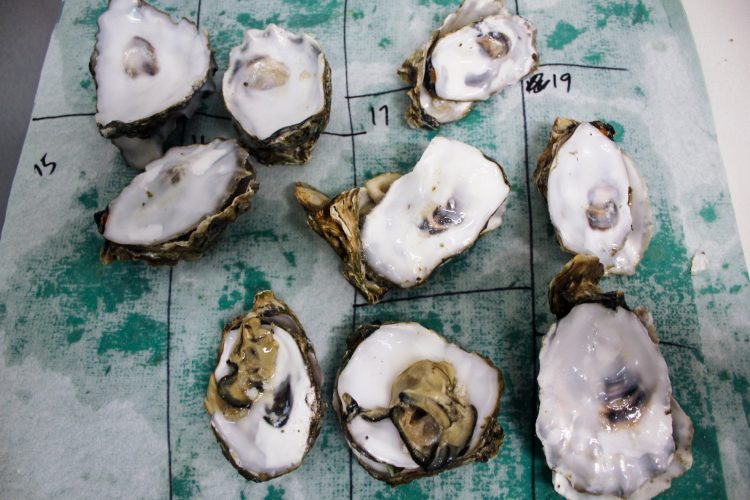 Empty Pacific oyster shells are placed on a mat after being sampled. The effect of acidified waters on multiple generations of Pacific oysters can influence aquaculture in Washington and globally.Yaamini Venkataraman/University of Washington

“Warming and acidifying oceans negatively influence many marine species. However, some species that live in extreme environments, such as the intertidal, may be more resilient than others to these changes,” said Laura Spencer, one of the two lead authors and a graduate student in aquatic and fishery sciences. “Some species may even be able to pass on memories of harsh conditions to their offspring, making them more capable of surviving in similarly harsh environments.”

Researchers studied two species of ecologically and commercially valuable oysters found throughout Puget Sound: the Olympia oyster and the Pacific oyster. Although oyster larvae are sensitive to acidifying oceans, adult oysters commonly occur in intertidal areas and estuaries where they must endure constantly fluctuating water conditions.

It is this hardiness that has researchers hopeful that oysters can withstand an increasingly acidic ocean. If their resilience to stressors can be passed down to their offspring, it could promote an increased tolerance among the future population.

“We found that Olympia oyster adults were relatively resilient to acidification and warming when exposed during the winter,” said Spencer. “Most interestingly, we found evidence that adult exposure to acidified conditions can benefit offspring by improving survival.”

This carryover effect demonstrates that the experiences of oyster parents have a direct impact on how their offspring perform, and juvenile oysters may be more resilient in certain environments when their parents have been pre-conditioned by similar stressors.

In the other study, adult Pacific oysters were similarly exposed to acidified conditions in the lab. The oysters were then placed back in ambient water to recover before spawning. Researchers observed that the embryonic and larval offspring of female oysters exposed to these experimental conditions experienced poorer survival than a similar control group.

“The conditions one generation of Pacific oysters experience can affect how their children perform,” said lead author Yaamini Venkataraman, a graduate student in aquatic and fishery sciences. “Even if oysters are not in stressful conditions when they reproduce, their previous stressful experiences can impact their offspring.”

These two contrasting results are both encouraging and concerning to Washington’s shellfish industry, which generates nearly $150 million a year and provides over 2,700 jobs. While one study revealed that juvenile Olympia oysters benefited and experienced a survival advantage due to parental exposure to acidified conditions, the other study showed the embryonic and larval survival of Pacific oysters decreased with parental exposure. The authors believe these differing results could be species-specific or because the experiments focused on different life stages of oysters.

Nevertheless, determining how and why some species, such as the Olympia oyster, tolerate ocean acidification and warming helps inform where to focus conservation resources and how to improve growing methods, said Spencer.

“We needed to broaden our understanding of environmental memory when thinking about how oysters or other organisms will persist in the face of climate change,” explained Venkataraman. “The aquaculture industry is part of the fiber of Washington, and understanding how oysters will respond to changes in their environment, like more acidic water conditions, across multiple generations is crucial to sustaining the industry.”

This recent research shows that as the world’s oceans warm and become more acidic due to climate change, species tolerance or sensitivity can’t be defined by looking solely at one generation of oysters.

Additional co-authors are Ryan Crim and Stuart Ryan with the Puget Sound Restoration Fund; Micah Horwith, who completed the work with Washington Department of Natural Resources but now works at Washington State Department of Ecology; and Steven Roberts, a UW professor of aquatic and fishery sciences.