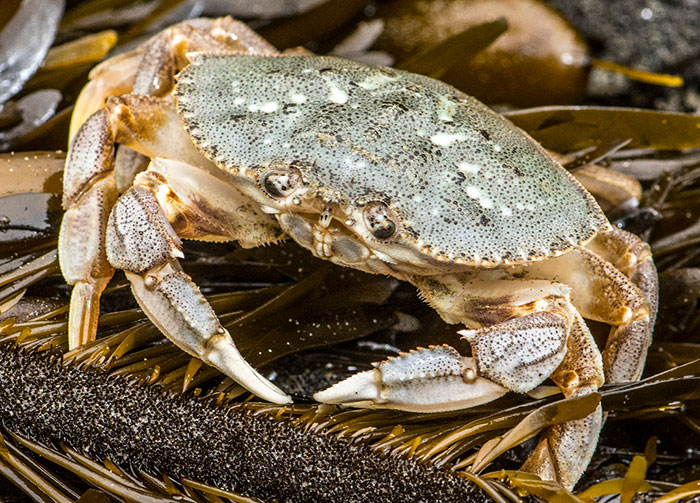 A Dungeness crab, or Cancer magister, sits on kelp.Jerry Kirkhart/Flickr

New research on the Pacific Northwest portion of the Dungeness crab fishery, which spans the West Coast of the U.S. and Canada, projects how this crustacean will fare under climate change.

Results show that by the end of this century, lower-oxygen water will pose the biggest threat. And while these crabs start as tiny, free-floating larvae, it’s the sharp-clawed adults that will be most vulnerable, specifically to lower-oxygen coastal waters in summer.

The open-access study from researchers at the University of Washington, the University of Connecticut and the National Oceanic and Atmospheric Administration will be in the December issue of AGU Advances, a journal of the American Geophysical Union.

“Including all life stages allowed us to identify a critical life stage, and thus make a management recommendation,” said co-author Samantha Siedlecki at the University of Connecticut, who began the study while at the UW. “Looking seasonally, instead of annually, gives different — and more severe — vulnerability estimates.”

Dungeness crab is the largest single-species fishery in the Northwestern U.S. Washington’s Dungeness Crab Festival takes place in October near the Dungeness Cove that gives the species its name, and the crustacean is a favorite of Pacific Northwest holiday meals and in traditional diets. The study was designed in consultation with the Hoh, Makah, Quileute and Quinault Indian Nation tribes, whose members harvest, study and eat Dungeness crab on Washington’s Olympic Peninsula.

The researchers used a detailed computer model of ocean conditions to simulate the shifting properties of the water the crabs inhabit. Using a scenario of high carbon emissions through 2100, the model looks at how heat-trapping gases in the atmosphere will make the ocean warmer, carbon dioxide transferred from the air will make the surface waters more acidic, and warmer water will hold less dissolved oxygen.

Previous research has shown that the Dungeness crab is vulnerable to climate change. Those studies focused on changes in ocean pH, while the new paper includes multiple ocean properties and uses a model that is more detailed in space and time.

Time and place are both important. Crabs mate in spring and females produce eggs in late fall. Eggs begin to hatch in January and release larvae, which float in the offshore currents while growing, shedding and regrowing their shells five times. In summer the fully developed larvae come back closer to shore and molt, becoming juvenile crabs that scamper on the ocean floor.

Dungeness crabs have a complex lifecycle, that involves larvae floating freely in the currents in the winter and spring months. Juveniles can reproduce after about 2 years, and adult females have a lifespan of 8-10 years. The study focused on the population colored blue on the map.Berger et al./AGU Advances

The authors used an ocean model to study the consequences of climate stressors at different times throughout the Dungeness crab’s life stages — from eggs, to larvae, to juveniles, to adults.

“We found that for all three stressors there will be increased population-level vulnerability, and the most severe is to low oxygen levels,” said first author Halle Berger, a doctoral student at the University of Connecticut. “Low-oxygen events happen during the coastal upwelling season in spring and summer, which impacts the adults, whereas ocean acidification manifests more year-round in the future, impacting all life stages but less severely.”

Lab studies of Dungeness crab combined with model results suggest that the most severe effects will be lower dissolved oxygen along the coastal seafloor in summer, harming the adults. This is unlike other species, such as shellfish, which are thought to be most vulnerable in the larval stage.

Like other animals, crabs breathe oxygen. Warmer water holds less gas, so even if marine life can handle the higher temperature and acidity, the drop in oxygen may lower the chance for survival. 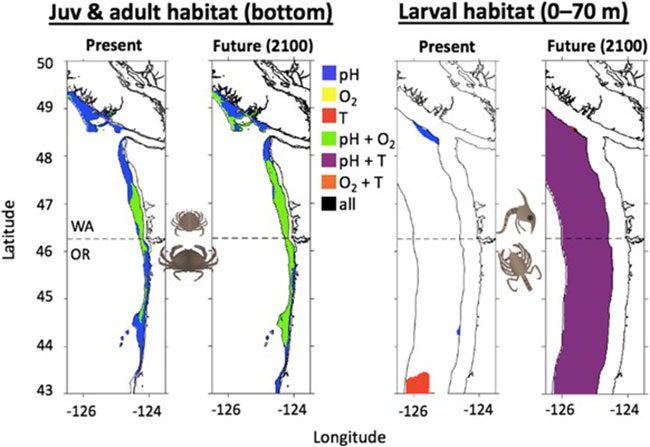 These maps show where Dungeness crabs are most vulnerable in summer, now and in the future. On the left, adult crabs already experience low pH (blue) and a combination of low pH and low oxygen (green) across most of their range. The second panel, from an ocean model, shows the green area representing dual threats will expand by 2100. The panels on the right show the risks to free-floating larvae. In the third panel, some larvae already experience low pH (blue) or high temperatures (red). In the future, both threats will be present throughout the range, but the study suggests this will be less harmful than the changes closer to shore.Berger et al./AGU Advances

“The value of this down-scaled model is that it can help tribes and state agencies to focus their efforts in both space and time,” said co-author Jan Newton, an oceanographer at the UW Applied Physics Laboratory and co-director of the Washington Ocean Acidification Center. “This information is very pertinent to resource managers.”

The researchers say these results could be incorporated into decision-making as ocean conditions change.

“An example would be monitoring low-oxygen events in the summer, and maybe pulling the crab traps earlier,” Berger said. “This would help mitigate from the crabs dying in the trap.”

Further research on the Dungeness crab should include more lab studies on how the species responds to multiple stressors. More generally, authors say, the study shows a way to understand how marine species with complex life stages will respond to climate change.

Other co-authors are Darren Pilcher and Emily Norton at the UW-based Cooperative Institute for Climate, Ocean and Ecosystem Studies; Simone Alin and Isaac Kaplan at the National Oceanic and Atmospheric Administration; and Catherine Matassa at the University of Connecticut.

The research was funded by NOAA and was part of a regional vulnerability assessment for the Olympic Coast to ocean acidification.

Part of this text was adapted from a press release by the University of Connecticut.