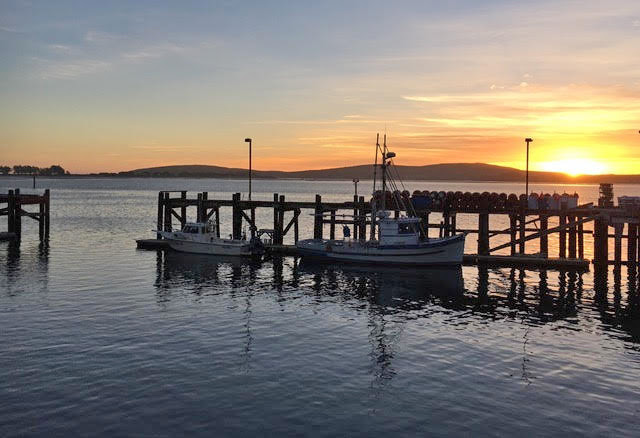 As human activity increases carbon dioxide emissions, the oceans absorb more and more carbon as a result. “The ocean can take up an amazing amount of carbon,” says Tessa Hill, Professor of Earth & Planetary Sciences, UC Davis, resident at Bodega Marine Laboratory, and Associate Director of the Coastal and Marine Sciences Institute. “But the carbon makes the ocean more acidic, and this has effects on the shell-bearing creatures of the ocean. The acidic water can corrode their shells, or keep them from properly forming shells in the first place.”

“We know that climate change causes fundamental chemical changes. We know that CO2 is really soluble in seawater, but what are the real impacts this is having on marine life? We want to integrate lab experiments with measurements we take in the field to answer those questions,” says Hill.

With regards to the first prong, Satlantic SeaFET solid state pH sensors have been deployed. Todd Martz of Scripps Institution of Oceanography has also developed a way to pair these pH sensors with those that measure oxygen, salinity and temperature. Burke Hales at Oregon State University also builds equipment for monitoring carbon dioxide concentration for use in the marine lab or in sustainable agriculture communities. Some of the equipment sits at Hog Island Oyster Company, in Tomales Bay, CA.

Some of the lab equipment being used includes Metrohm titrators for total alkalinity, as well as Ocean Optics and Shimadzu equipment for spectrophotometric pH.

In addition to the lab research, there is significant experimentation going on in the field. “There is a network of oyster farms along the West Coast,” says Hill. “In the network, farmers have been paired with university researchers so that the farmers might improve their oyster health and yields and the researchers can gather extensive field data.” 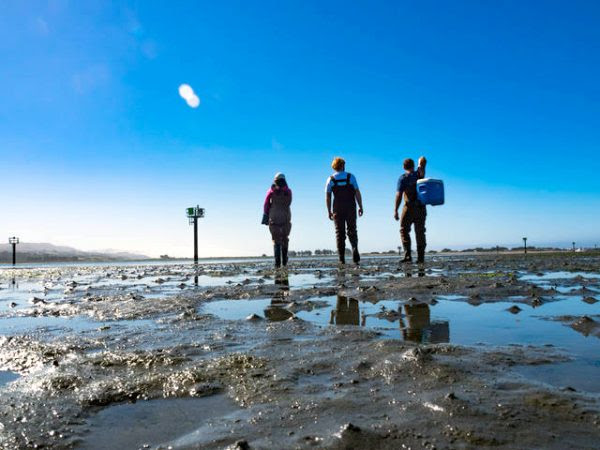 Students walk out on the mudflats in Bodega Harbor to begin sampling in seagrass meadows. (Photo credit: Aaron Ninokawa)

Samples are taken in specific habitats of interest such as seagrass meadows. Water samples are also taken in bottles once a week in the field for a three week period.

One of the research interests is whether plants conducting photosynthesis such as kelp and seagrass are pulling significant carbon out of seawater.

“So far we have about four to five years of data for the photosynthesis study, and it looks like the seagrass meadows are having a positive effect,” says Hill. “However, seagrass also has a seasonal cycle. While there’s a lot of growth and some carbon uptake in the spring and summer, when the seagrass meadows are big and lush, in the fall and winter the meadows die back. During those parts of the year, the meadows are having significantly less of an effect.”

The flow rate of water through the seagrass meadows also has an impact on how much carbon is utilized in the plants’ photosynthesis, Hill notes.

Another researcher, Kerry Nickols of California State at Northridge, has been conducting similar research on kelp forests, yielding about 10 years’ worth of data.

“We are working on synthesizing our results,” says Hill.

Both undergraduate and graduate students assist with data gathering. “We always have a lot of students,” Hill mentions. “We have one or two undergrad students, paid, who work in the lab through the year. They are doing monitoring and data analysis. We also have grad students. We have about four to six PhD students at any one time in our research group, and maybe one masters student. We also mentor postdoctoral scholars. We have more undergrads in the summer. We have about four to six undergrads in the summer who do summer research projects for course credits.”

Hill has been at Bodega Marine Laboratory for the past 15 years. “The first 2 years I was a postdoctoral researcher, after that, I have been in a faculty position,” she recalls. “We’ve been working in the field of ocean acidification for about 10 years. Our research group is comprised of faculty members Eric Sanford, Brian Gaylord, and I. We were drawn to OA because OA sits at a nexus of fundamental things we don’t yet understand about the ocean and science that can be used for decision making.”

In her time at Bodega, Hill has enjoyed the research challenges and also the impact her group’s work has had outside of the lab. “We are learning interesting and exciting new things that weren’t known about the ocean before in our OA research,” Hill says. “Our work also gives us the opportunity to interact with decision makers and they can incorporate what we learn in their deliberations. We interact with state agencies, federal agencies and stakeholders. We also can help sustainable shellfish farmers achieve better outcomes.”

In her parting thought, Hill mentions that a better future rests on gathering good data today. “Environmental monitoring is absolutely key for us to make good decisions about managing resources and ecosystems,” she notes.