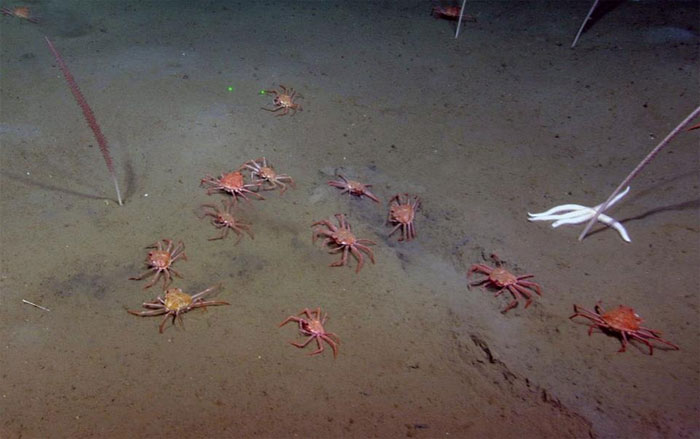 Oregon State University researchers have documented tanner crabs feeding at a methane seep site off British Columbia. Tanner crabs are also known as ‘snow crabs’ and sold as food. It is the first time a commercially harvested species has been known to feed at methane sites.The methane shouldn’t cause any health concerns and, in fact, it may provide an alternative energy source for seafloor-dwelling marine species. [Oregon State University]

Climate change will result in less ocean-borne food falling into the deep sea, scientists say. But that likely won’t be a problem for tanner crabs, according to a recent discovery by Oregon State University researchers.

The long-legged orange crabs — one of three species that crabbers harvest and sell as snow crabs — vigorously feed at methane seeps, where the gas bubbles up from the ocean floor.

“The thinking used to be that the marine food web relied almost solely on phytoplankton dropping down through the water column and fertilizing the depths,” OSU Marine Ecologist Andrew Thurber said in a statement. “Now we know that this viewpoint isn’t complete and there may be many more facets to it.”

Thurber co-authored a study that the journal Frontiers in Marine Science just published. The study details how scientists found tanner crabs in eating frenzies around a methane seep in the floor of the Pacific Ocean off British Columbia. It is one the first times that a commercially harvested seafood has been found to rely on methane seeps.

Methane seeps appear to be serving up food to seafloor-dwelling species, such as tanner crabs. This would be a hedge against climate change because nearly all models predict less food will drop into the deep sea in coming years.

“Tanner crabs likely are not the only species to get energy from methane seeps, which really haven’t been studied all that much,” Thurber said. “We used to think there were, maybe, five of them off the Pacific Northwest coast and now research is showing that there are at least 1,500 seep sites — and probably a lot more. … They are all over the world, so the idea that they may provide an energy source is quite intriguing.”

Researchers first noticed tanner crabs bunching up around methane seeps in 2012 off the British Columbia coast. The crabs sifted through sediment at the bubbling seeps. Mats of bacteria form around the seeps and the crabs munch on those.

Underwater video shows methane building up below tanner crabs hanging out at seeps and eventually flipping them. The entertaining video drew researchers to wonder why the crabs were gathered around the seeps in the first place.

OSU teamed up with scientists from the University of Victoria in Canada. The National Science Foundation in the U.S. provided support for the study.

Off the Oregon Coast, Pacific sole and black cod have been seen near methane seeps. Like the crabs, the fish are harvested.

But seafood lovers need not worry about what their food is eating. Researchers say methane seeps create nontoxic environments.

Sarah Seabook, the lead author of the study and a Ph.D. candidate at OSU, said scientists examined the guts and tissues of tanner crabs to confirm they were feeding around methane seeps.

″… We can apply these new techniques to other species and find out if the use of methane seeps as a food source is more widespread than just tanner crabs,” she said in a statement.