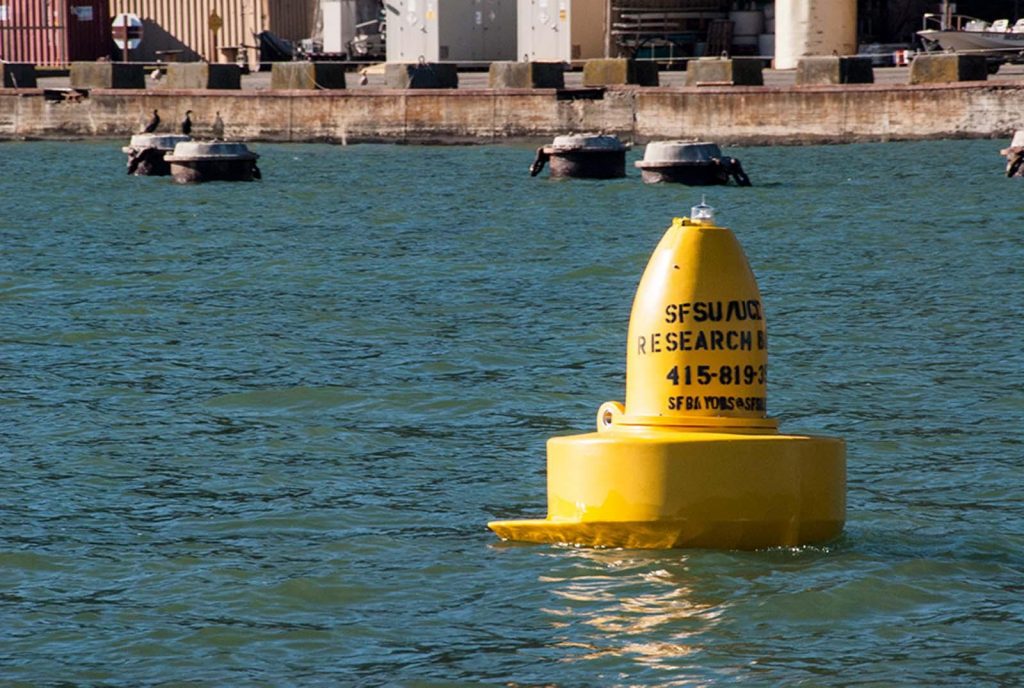 Ocean acidification and the effect it will have on the San Francisco Bay hasn’t received the scientific study you might imagine, given how frequently climate change comes up in discussions of the Bay.

To date there has been almost no long-term monitoring of the Bay’s carbon chemistry, for example. Ocean acidification is “expected to impact estuaries on the West Coast,” one scientific report concluded in 2016, but “chemical and biological data on acidification threats and impacts are lacking.”

There are a lot of basic questions. Does ocean upwelling bring acidified—CO2-rich and oxygen-poor—water into the Bay? Does acidification threaten the Bay’s marine life, and which life, and how much? Do restored tidal marshes soak up or burp out carbon? How much carbon, and are all estuaries like that? Could local projects to capture and store CO2 before it’s emitted become part of the carbon offset market?

This past winter, scientists from SFSU, UC Davis, and the National Oceanic and Atmospheric Administraton–backed Central and Northern California Ocean Observing System (CeNCOOS) dropped a seawater-chemistry-monitoring buoy and companion mooring into the deep green water just behind the EOS in Tiburon. The buoy and mooring are intended to continue operating for decades as part of NOAA’s global ocean monitoring system, meaning scientists will operate blindly no longer.

You can follow two of the buoy’s measurements in real time: CO2 in the air, and in the water at its surface. All other things being equal, water and air will exchange gases while moving toward equilibrium, so you’d expect the two numbers to be pretty close if they were near equilibrium.

But seawater can change rapidly, and in the new Bay buoy, the first months were characterized by differences between CO2 concentration in the air and water. The air held mostly steady at around 400 parts per million, basically the global atmospheric level. But the seawater CO2 level has fluctuated, spiking to nearly 900 ppm. Water in the Bay is somehow finding a lot of CO2 from somewhere. But where?

One influx, according to UC Davis ocean scientist John Largier, comes from the ocean. The natural phenomenon of ocean upwelling is constantly flooding offshore areas with cold, acidic water from the deep. Some have questioned whether that dense upwelled water can slither over the sandbar just outside the Golden Gate and so enter the Bay. Largier has argued it can and does, magnifying the importance of the Pacific as a watershed for the Bay. Largier now wants to determine the influence of the ocean watershed relative to the Bay’s various terrestrial watersheds and internal cycling as sources of CO2. So he was interested to see that over the buoy’s first few months of operation, active upwelling periods offshore corresponded to the new buoy’s recording of very high CO2 concentration in the seawater relative to the air. Further solidifying the case that the CO2 is coming in from the ocean, the Bay water CO2 peaks around the high tide and drops during the ebb.

And that’s just a few months of information on a single data point. The buoy and mooring are designed to capture much more, including chemistry at depth, pH, salinity, and temperature. Largier says scientists will start to be able to answer some of the basic Bay questions after they’ve watched for at least a year, through cycles of strong and weak ocean upwelling, through summer and winter, dry and wet weather, perhaps through an algal bloom or other low-oxygen event. That long-term view, absent so far when it comes to water chemistry, can help scientists make meaning of the millions of dollars spent improving the Bay in anticipation of climate change.

“It’s sort of catching up a little bit, isn’t it,” Largier says. “You’d think by now, given the intensity of this issue, that people, somebody, would have invested already in knowing what’s going on.”