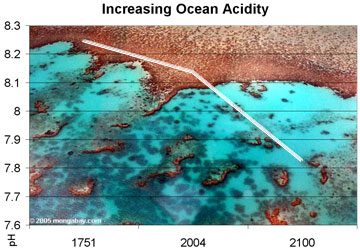 Observed and projected decline in global ocean pH, 1750-2100. Photo by Rhett A. Butler

Since the industrial revolution began, we have released 2 trillion tons of carbon dioxide (CO2) into the atmosphere, and about one-third of it went into the ocean. We initially thought that the ocean taking up CO2 was a good thing – because it took it out of the atmosphere. Unfortunately, we were wrong.  There has been a 30% increase in the acidity of the ocean since 1700, and we now expect that by 2100, it will have become a 100% increase. This constitutes a rate of change in ocean chemistry that is 10 times anything scientists can document over the last 50 million years.

The plants and the animals of the ocean evolved to thrive in a fairly neutral pH ocean.  Thus, when the chemistry shifts and the ocean becomes more acidic, the plants and animals are immediately affected. The most immediate effects are on calcifiers, those animals who depend on taking up calcium carbonate from ocean waters to build their shells or external skeletons—an ability that is lost when hydrogen bicarbonate is formed instead.  From the tiniest pteropods to corals, lobsters, crabs, and shellfish, the very basis of the web of life within our ocean is affected. 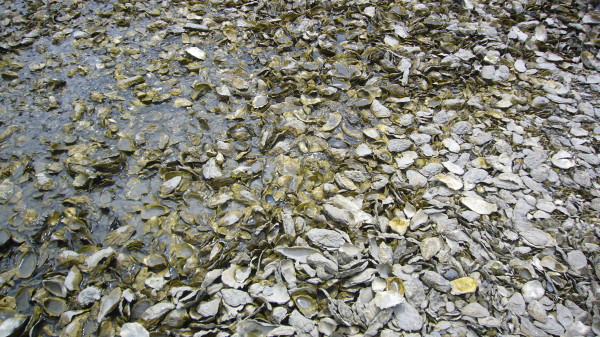 The food web impacts will affect the seafood industry: both the calcifiers we harvest (lobster, shrimp, scallops, crab, and oysters) and the pollock, salmon, and tuna.  In fact, all of the commercial fish species who feed on phytoplanktonic calcifiers.

The good news is that there are steps we can take to meet the challenge of changing ocean chemistry, even as we strive to reduce the root cause—greenhouse gas emissions.  We can do something to address this global acidification problem locally.  And, we can work to understand ocean acidification (OA) globally, and share with others how to address it locally.

In the upper Northwest of the US, the shellfish industry is worth hundreds of millions of dollars and it depends on clean nearshore waters. A few years ago, shellfish growers in the upper Northwest noticed that their shellfish, especially oysters, were having trouble developing strong, well-formed shells.  The culprit was determined to be spikes in the local waters’ acidity, underpinned by a general increase in acidity overall —in other words, changes in the chemistry of coastal waters that made a hostile environment for shellfish. Growers were able to come up with some strategies to mitigate the problem in the short term, but it was clear, especially to industry leaders such as Bill Dewey of Taylor Shellfish, that something bigger needed to be done to preserve the productivity of the coastal waters of the region.

Obviously, reducing carbon emissions now would help reduce acidification in the longer term, but what other solutions existed?  Washington State Governor Christine Gregoire convened a Blue Ribbon Commission to review the problem, the known science and solutions, and determine what could be done at the state and local level. The final Commission report made a number of recommendations to address the OA problem.  And, to the credit of business, conservation, legislative, and executive leadership, that report did not go sit on a shelf to collect dust as so many reports do.

Instead, the Washington state legislature passed an OA measure that established monitoring protocols, defined strategies that could work to mitigate the problem locally, and created a funding mechanism to help pay for it.

Read the rest of the story on National Geographic.