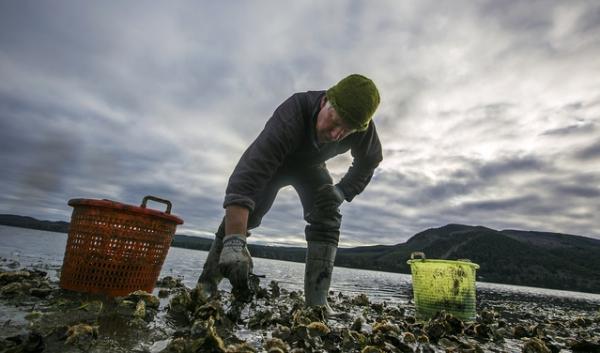 Mark Wiegardt’s family has farmed oysters for more than a hundred years. He works with his wife, Sue Cudd, owner of Whiskey Creek Shellfish Hatchery, to supply oyster larvae to farms all over the region. – Karina Ordell

He picks up a clumps of oysters and rests it on his thigh, stabbing and wrenching until the shellfish crack apart.

The creatures inside are more valuable than ever, so Wiegardt tries his best to make them look nice by bashing off the sharp edges.

Oysters are biologically simple. But nothing is simple about the water in which they live. The Pacific Northwest’s ocean chemistry is changing. A phenomenon known as ocean acidification has shocked the Northwest oyster industry, causing farmers and hatchery owners to modify decades-old ways of cultivating oysters and reconsider the murky future of their industry.

“Our business has definitely been been altered by this changing water chemistry,” Weigardt says.

Like many hatcheries on the West Coast, Whiskey Creek grows Pacific oysters — a Japanese species introduced to America in the early 1900s. Farmers grow oysters in enclosed waters connected to the ocean, known as estuaries. But the coastal waters of the Northwest are too cold for Pacific oysters to spawn naturally. So oyster seed suppliers like Whiskey Creek act as incubators.

Whiskey Creek houses huge vats of seawater that serve as swimming pools for young oyster larvae to develop. When the larvae are mature enough, the hatchery packs them in balls of paper towels before sending them to independent oyster farmers along the coast.

The farmers take the oyster “seed” to their nurseries and dump it into giant tanks, where the larvae “set” onto vacant oyster shells. When they are mature enough, the farmers remove the shellfish from the tanks and chuck them into the bay. The oysters will stay here for a couple years, fattening up by filtering algae and other nutrients out of the water. Eventually, the farmers will return and gather their harvest so the full-grown oysters can be bagged and sold.

In the late summer of 2007, the oyster larvae at Whiskey Creek Shellfish Hatchery didn’t make to the bay. Without warning, the larvae began to fail by the millions inside the vats.

“Everything was dying. The larvae were pink. Every larva in the place was not feeding,” says Sue Cudd, owner of Whiskey Creek.

Whiskey Creek couldn’t supply its customers with seed. No one could understand why the larvae were dying.

“The changes were so dramatic, we thought there was a very strong possibility that we were going to go out of business,” Wiegardt says.

A year after the first die-offs, Whiskey Creek engineer Alan Barton scrambled for clues explaining why Whiskey Creek’s methods were suddenly not working. Barton discovered that an upwelling of ocean water with unusually high acidity was corroding the oysters’ shells, causing the larvae to die while trying to form an exoskeleton. He was eventually able to stem the die-offs by adapting simple aquarium chemistry to equalize the pH in Whiskey Creek’s tanks.

Since then, Whiskey Creek has learned to sustain healthy brown larvae in its vat water with a system that constantly buffers the water. However, the effectiveness of buffer chemicals is limited to hatchery tubs.

The die-offs made 2007 a defining year for West Coast oyster farmers.

Kathleen Nisbet, a manager of Goose Point Oyster Company in Willapa Bay, saw the die-offs as a signal to change. In 2009, Goose Point began constructing its first oyster hatchery in Hilo, Hawaii, in order to lessen its dependence on hatcheries like Whiskey Creek, which draw water from the Northwestern tides. Though the Nisbets had long done business with Whiskey Creek, and still do, they felt they had to set themselves apart geographically to insulate their business from the acidic waters.

“I employ 70 employees; I’m responsible for 70 families. That’s a big deal to me,” Nisbet says. “I can’t just say, ‘We’ll figure it out.’ I’ve got people I have to feed and it was our responsibility to look at what we needed to do.”

But even as one crisis seems resolved, another one looms. There’s a new concern that mature oysters may soon be at risk. Roberto Quintana, an engineer at Ekone Oyster Company on Washington’s Willapa Bay, has begun to see health defects in oysters out in the bay that he can’t correlate with natural events.

“Last year was when I first heard some of the old-timers from around here who were like, ‘We don’t know what the hell happened,’” Quintana says.

There is no consensus on what to do if water chemistry in the bays turns inhospitable for mature oysters. Quintana says there are a few options: genetically engineer a more hardy oyster species; try to apply buffer chemicals directly into the bays; or perhaps just give oysters more time in their safe nursery tanks.

But for some, the thought of such dramatic changes to old farming techniques makes them question the long-term survival of the Northwest oyster industry.

“Those are big, philosophical questions,” Jambor says. “Do you get out of this business because you think it’s going to go down in 30 years? I don’t know.”

Whiskey Creek’s Wiegardt, however, is not about to idly watch the Northwest oyster industry go down in his lifetime. In the last few years, he has travelled many times with other Northwest shellfish producers to Washington, D.C., to tell their stories and ask lawmakers to pay for monitoring stations that would measure the water’s acidity.

“Farmers in general, I think we all like to complain a little more than we should,” he says. “[But] any time you know a little bit about something that may have a huge impact, you need to communicate that.”

Wiegardt thinks he has been well received in the Capitol, and he accepts these trips as his responsibility to the small community of Northwestern oyster farmers who know each other by first name.

“It’s not all doom and gloom,” Wiegardt says. “We’re solving a problem here as we speak.”

Kathryn Batstone-Boyd, Karina Ordell and Ben Stone are students in the University of Oregon’s School of Journalism and Communication. This report was produced as a class project. Video produced by Batstone-Boyd; photography by Ordell; article written by Stone.