Posted on Seattle Times: Story by Craig Welch, Photos by Steve Ringman — For a glimpse of how nature might — or might not — adapt to ocean acidification, scientists turn to the prickly “hedgehog of the sea.” Article features C-CAN steering committee members UCSB scientist Gretchen Hofmann and sea urchin diver Bruce Steele

As fossil-fuel emissions disrupt marine life, will evolution come to the rescue?

Like Darwin’s finches or Great Britain’s peppered moths, these hedgehogs of the sea increasingly embody nature’s stunning capacity for resilience.

A number of plants and animals threatened by souring seas, including some mussels, abalone, rock oysters, plankton and even a few fish, appear likely — at least at first — to adjust or evolve. But few seem as wired as these saltwater pincushions to come through the next several decades unscathed.

Yet work with urchins, as well as other species, suggests that acidification sooner or later may still push these and other marine organisms beyond what they can tolerate.

“Evolution can happen, and it can happen quickly,” said Hofmann, a marine biologist at the University of California, Santa Barbara (UCSB), who has studied urchins for years. “But concerns about extinctions are very real and very valid. Biology can bend, but eventually it will break.”

The oceans are absorbing a quarter of the carbon dioxide emitted by burning coal, oil and natural gas. That, researchers say, is causing sea chemistry to change faster than it has for tens of millions of years.

Which plants and animals can accommodate these more corrosive seas — and for how long — will depend on many factors, from where they live to their population sizes to the depth of stress they face from other forces, such as warming temperatures and pollution. Survival will vary species by species. Not everything will make it.

“This kind of change is not free; evolution is not a gentle sport,” said Stephen Palumbi, an evolutionary ecologist at Stanford University, who also works extensively with urchins. “When evolution happens, it’s because the unfit are dying. It’s pretty brutal.”

And that’s when things work well. 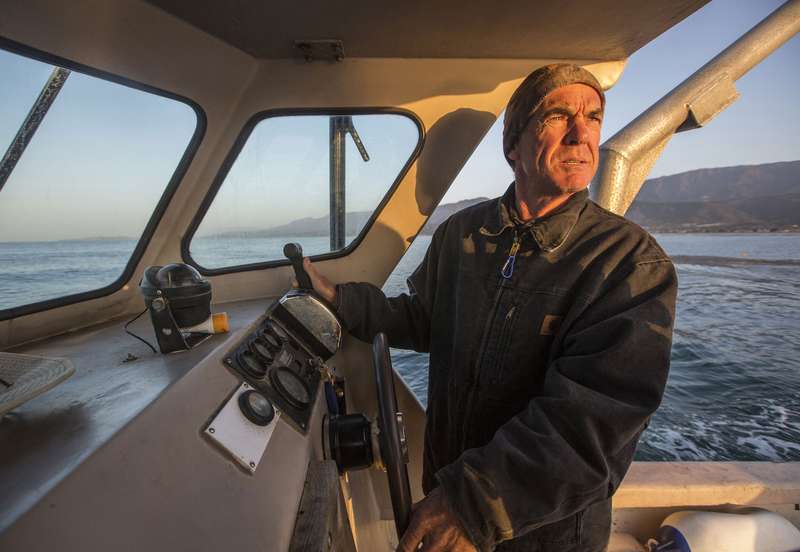 Commercial fisherman Bruce Steele, on the water off the coast of Santa Barbara, scouts for a place to dive for sea urchins. It was Steele who first brought concerns about acidification to urchin experts at the nearby university. 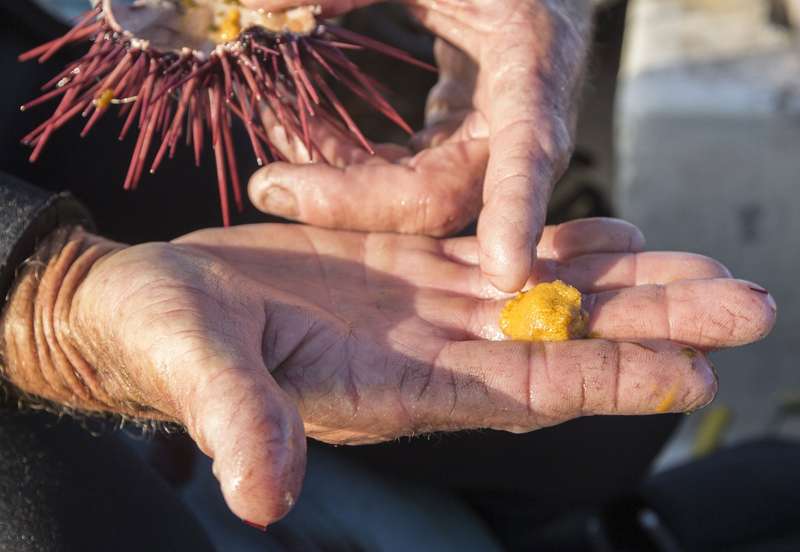 Steele cracks open an urchin and shows off the edible portion inside. Scientists recently found that urchins appear to have some capacity to adapt to acidification, but it’s not clear how much that work will apply to other plants and animals.

In the late 2000s, commercial urchin fisherman Bruce Steele feared things would not go so well. And for good reason.

Urchins graze on algae, drive out kelp and are eaten by sea otters, sunflower stars and humans. Steele, a scuba diver, had made his living since the 1970s scooping the spiny delicacies off the seafloor to sell to sushi restaurants as uni.

But when he read a research paper about acidification, he saw right away what it could mean for his business — and for the ocean he loved.

“When you start knocking out the very bottom of the food chain, it’s incredibly terrifying,” Steele said. “But that’s what the research is showing us.”

Increasing CO2 not only makes oceans more corrosive, it reduces carbonate ions, which everything from scallops to crabs, coral and sea urchins need to build shells or skeletons.

So Steele dialed up Hofmann, his local university expert on spiky echinoderms.

“She thought it was a crank call or something, because … I don’t know,” Steele said. “I guess people figure a sea urchin diver’s not going to be reading a whole bunch of science.”

Hofmann dismissed Steele at first, but quickly called back and started investigating his concerns. She exposed sea urchin larvae to high-CO2 water and made a troubling discovery: Their bodies often got smaller.

“Overall, their body size really matters in how well they swim and how much food they get,” Hofmann said. “So if you’re smaller, it’s really bad news if you’re a baby sea urchin in the water.”

But Hofmann noticed something else, too: Some larvae didn’t change at all.

“When we started raising our babies in the lab, we saw that some of them shrank,” Hofmann said. “But, in fact, some of them didn’t. There were some in there that didn’t respond the same way.”

Hofmann knew enough about genetics to know that distinction might prove important.

Read the rest of the story on The Seattle Times.