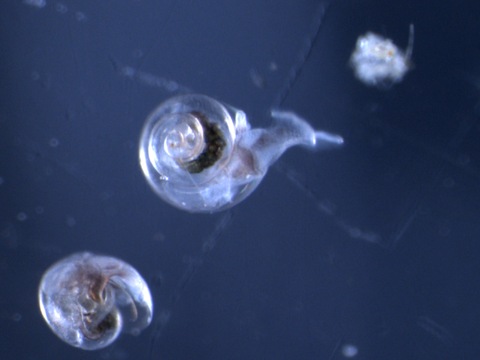 Rising levels of ocean acidity is bad news for pteropods or “sea butterflies”, a species that plays a critical role in its ecosystem. Photo by Nina Bednarsek/NOAA

SEATTLE – It’s a sunny and mild summer’s day in the Pacific Northwest, but biological oceanographer Nina Bednarsek has no time to enjoy the weather. She spends much of it in a somewhat cramped metal container, on board a ship, checking and double checking connections between dozens of plastic jars and tubes. Everything must be in working order for the scientific voyage ahead.

Bednarsek works for the National Oceanic and Atmospheric Administration’s Pacific Marine Environmental Laboratory and specializes in pteropods, pea-sized sea snails, commonly known as “sea butterflies,” which live in the water column and use two “wings” to swim.

Pteropods are what’s known as a keystone species, a species that plays a critical role in its ecosystem.

“In the Arctic, [the] species get really big,” Bednarsek said. “A lot of organisms actually depend on them — among them birds, fish, whales.”

This report is part of a three-part series airing on the NewsHour broadcast this week on the unexpected consequences of climate change.

But they are increasingly threatened by ocean acidification. Ocean acidification is caused by changes in the water chemistry as it absorbs high levels of carbon dioxide from the atmosphere, put there by the burning of fossil fuels and land-use changes. More carbon dioxide increases the water’s acidity and decreases it’s pH, making it harder for organisms like pteropods to create healthy calcium carbonate shells. Scientists liken it to osteoporosis, the bone-thinning disease, in humans.

Melting sea ice worsens the problem. Bednarsek explains that when sea ice melts, there is more water to absorb more carbon dioxide, accelerating the process. And she wants to find out how much is too much for the pteropods.

Both the area and thickness of the ice has been receding, according to James Overland, an oceanographer at NOAA’s Pacific Marine Environmental Laboratory in Seattle. Using information collected from space satellites and water buoys, Overland’s research has played a role in determining that the area of Arctic sea ice has shrunk nearly in half since the 1980s and early 1990s. Three quarters of the ice’s volume has also been lost, data shows.

A phenomenon known as “arctic amplification” speeds up the process, he said. As ice cover is lost, the sunlight that would have been reflected by the snow and ice gets instead absorbed by the water. This causes the water to absorb more heat, affecting winds and potentially changing weather patterns far away from the Arctic region.

And that’s just more bad news for the struggling pteropods.

“The first thing that happens is the dissolution of their shell,” Bednarsek explained. “Dissolution can be mild, [to] very severe. Once you have it dissolving on the outside, you have to put so much more energy into the shell in order to maintain it. The energy that you would otherwise use for other important physiological maintenance you are putting in the shell maintenance.”

Bednarsek’s research on the NOAA ship Fairweather will provide an opportunity to take a closer look at the species, hopefully targeting the point at which increased ocean acidity means pteropods can no longer survive.

Her experiments are designed to mimic potential ocean conditions in 30, 50 and 100 years, and to see how the animals respond, and how various levels of acidity affect their ability to feed and breathe.

Fans of seafood may want to follow her work. Pteropods account for as much as 60% of the pink salmon diet in the region, but other fish feed on them as well, including mackerel. And in addition to their role in the marine food web, the small creatures are also good indicators of the health of the ecosystem, Bednarsek said.

“We have proven [elsewhere] that human-made carbon is causing dissolution of pteropods already, so [they are] a great indicator and the changes are already underway.”

Read this story on PBS Newshour.