Posted on The Seattle Times: Story by Craig Welch, Photos by Steve Ringman (including comments from C-CAN collaborators)

Ocean acidification, the lesser-known twin of climate change, threatens to scramble marine life on a scale almost too big to fathom. 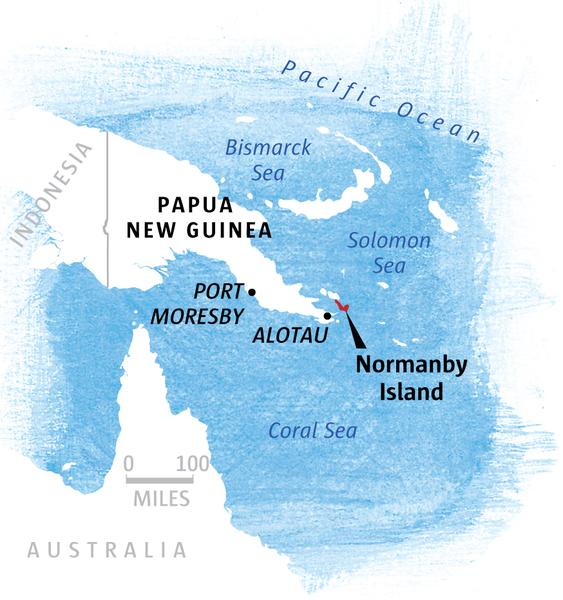 She kicked through blue water until she spotted a ceramic tile attached to the bottom of a reef.

A year earlier, the ecologist from the Australian Institute of Marine Science had placed this small square near a fissure in the sea floor where gas bubbles up from the earth. She hoped the next generation of baby corals would settle on it and take root.

Fabricius yanked a knife from her ankle holster, unscrewed the plate and pulled it close. Even underwater the problem was clear. Tiles from healthy reefs nearby were covered with budding coral colonies in starbursts of red, yellow, pink and blue. This plate was coated with a filthy film of algae and fringed with hairy sprigs of seaweed.

Instead of a brilliant new coral reef, what sprouted here resembled a slimy lake bottom.

Isolating the cause was easy. Only one thing separated this spot from the lush tropical reefs a few hundred yards away. 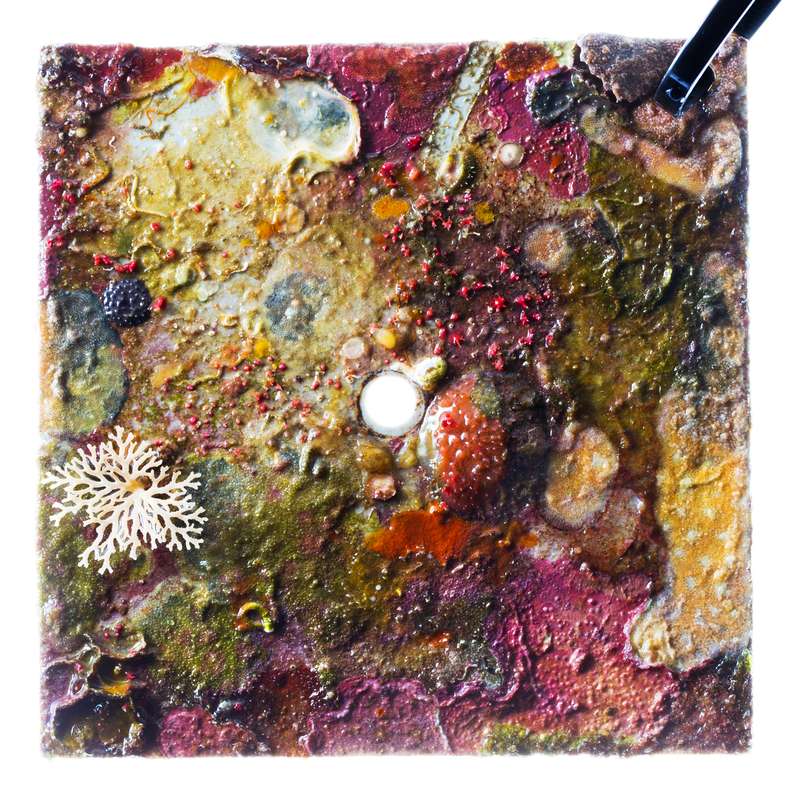 HEALTHY REEF: The colorful beginnings of a new reef sprout on a ceramic tile that was placed near healthy coral in Papua New Guinea. The baby corals and coralline algae on the tile provide a glimpse of the next-generation reef. 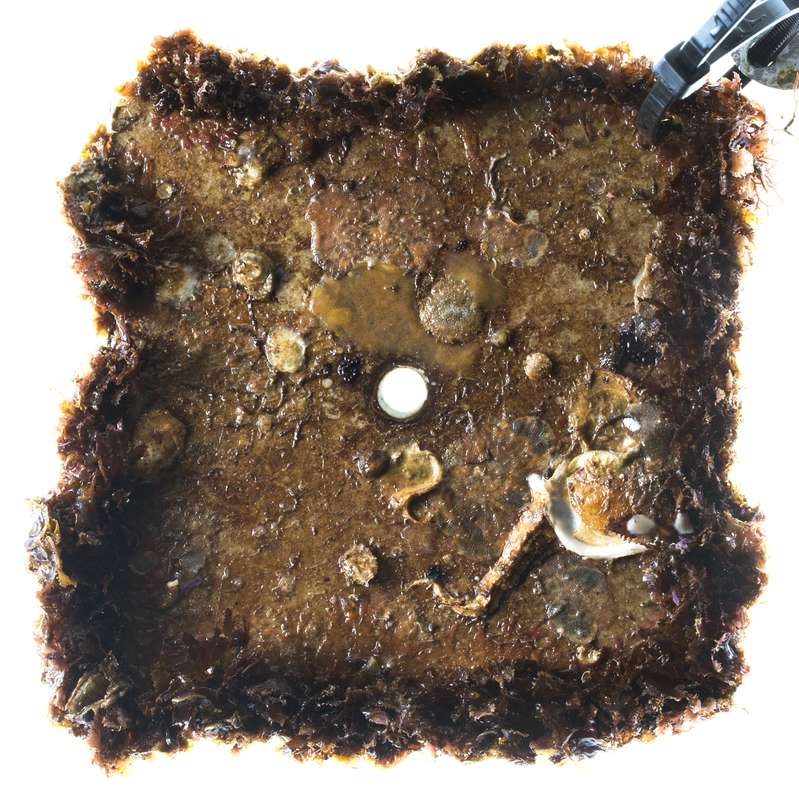 UNHEALTHY REEF: Algae and seaweed crowd out reef growth on a tile placed near Papua New Guinea’s CO2 vents. The more corrosive water mirrors what’s expected throughout the world’s oceans near the end of this century.

In this volcanic region, pure CO2 escapes naturally through cracks in the ocean floor. The gas bubbles alter the water’s chemistry the same way rising CO2 from cars and power plants is quickly changing the marine world.

In fact, the water chemistry here is exactly what scientists predict most of the seas will be like in 60 to 80 years.

That makes this isolated splash of coral reef a chilling vision of our future oceans.

‘High rates of extinction’ to come?

Imagine every person on Earth tossing a hunk of CO2 as heavy as a bowling ball into the sea. That’s what we do to the oceans every day.

Burning fossil fuels, such as coal, oil and natural gas, belches carbon dioxide into the air. But a quarter of that CO2 then gets absorbed by the seas — eight pounds per person per day, about 20 trillion pounds a year. 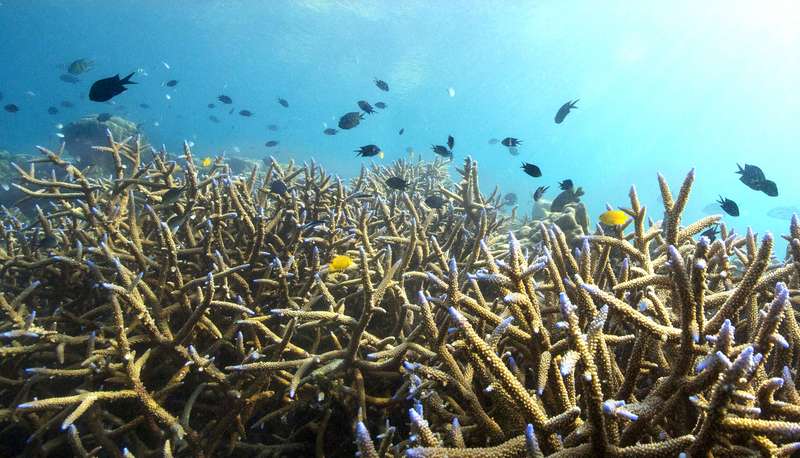 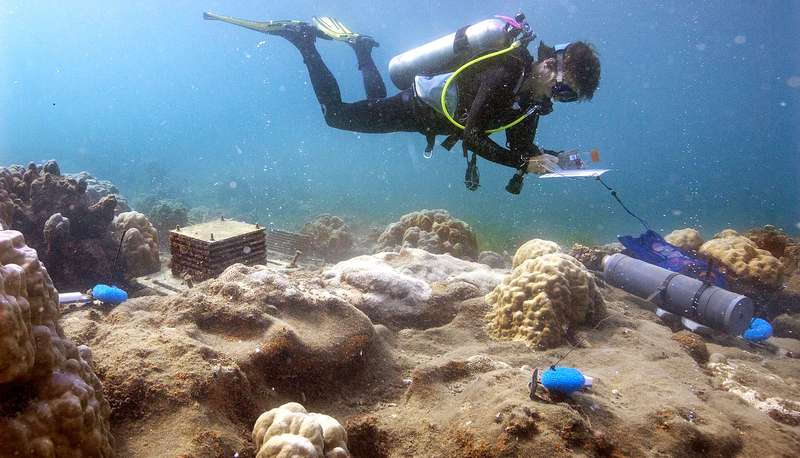 Scientists once considered that entirely good news, since it removed CO2 from the sky. Some even proposed piping more emissions to the sea.

But all that CO2 is changing the chemistry of the ocean faster than at any time in human history. Now the phenomenon known as ocean acidification — the lesser-known twin of climate change — is helping push the seas toward a great unraveling that threatens to scramble marine life on a scale almost too big to fathom, and far faster than first expected.

Here’s why: When CO2 mixes with water it takes on a corrosive power that erodes some animals’ shells or skeletons. It lowers the pH, making oceans more acidic and sour, and robs the water of ingredients animals use to grow shells in the first place.

Acidification wasn’t supposed to start doing its damage until much later this century.

Instead, changing sea chemistry already has killed billions of oysters along the Washington coast and at a hatchery that draws water from Hood Canal. It’s helping destroy mussels on some Northwest shores. It is a suspect in the softening of clam shells and in the death of baby scallops. It is dissolving a tiny plankton species eaten by many ocean creatures, from auklets and puffins to fish and whales — and that had not been expected for another 25 years.

And this is just the beginning.