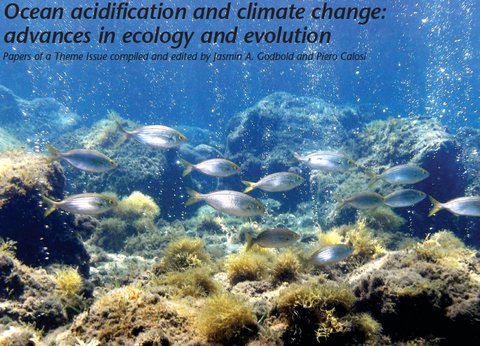 Royal Society: A detail from the cover of a Royal Society journal issue focused on the impacts of rising carbon dioxide levels on ocean ecosystems. The image is of CO2 bubbles rising from a volcanic vent near Naples.

Britain’s Royal Society has published a helpful new collection of papers in Philosophical Transactions of the Royal Society B that provide fresh insights on how the global buildup of carbon dioxide released by human activities could affect ocean ecology.

The work adds to a growing body of science pointing to large changes, with some types of marine organisms and ecosystems seemingly able to adjust and even thrive, while others ail. And it’s quite clear that regions already heavily affected by other human activities (coastal pollution, overfishing, etc.) are — no surprise — likely to feel more stress from acidification.

The nine new studies in the Royal Society journal provide valuable detail and find a mix of impacts. Experiments transplanting certain worms around a volcanic carbon dioxide vent in the sea floor near Naples show remarkable adaptability in these organisms, both through shifts in metabolism and genetics. A poles-to-tropics assay of sea urchins shows significant impacts on larvae.

One study demonstrated that not all shifts in species’ prospects are the result of changing pH. Competition matters. In this analysis, mat-forming algae appeared to thrive in CO2-enriched marine conditions, to the detriment of corals and kelp (an echo of how some forests studies show vines thriving at the expense of trees).

A year-long laboratory study of coccolithophores — an important type of phytoplankton — found they remained capable of forming their calcium carbonate skeletons even in warmer, more acidic water. The study, which propagated 700 generations of the diatoms, pointed out the value of longer-duration experiments.

Most of the work is accessible only with a subscription but an excellent summary is provided in an overview paper written by the two scientists, Jasmin A. Godbold of University of Southampton and Piero Calosi of Plymouth University, who assembled the package of studies. A link to their overview is below, along with excerpts from university news releases on two of the papers.

It’s great to see this emerging body of work given that the oceans, despite occupying two thirds of Earth’s surface and showing signs of substantial change driven by the buildup of carbon dioxide emitted by human activities, have remained a secondary scientific focus.

The vast majority of research in recent decades on the carbon dioxide buildup has been focused on the atmospheric impacts of the accumulating greenhouse-gas blanket even though the vast majority of the heated trapped by these gases has gone first into the seas — and the drop in seawater pH driven by CO2 has been a clear signal of substantial environmental change.

In 2005, Britain’s Royal Society issued “Ocean acidification due to increasing atmospheric carbon dioxide,” a helpful report summarizing the state of knowledge at the time.

Despite its climate-centric name and mission, the Intergovernmental Panel on Climate Change has been focusing increasing attention on direct ocean impacts of carbon dioxide, most notably in an excellent 2011 report, “IPCC Workshop on Impacts of Ocean Acidification on Marine Biology and Ecosystems.” The workshop summarized the state of understanding, key uncertainties and next research steps on the shifting chemistry of the oceans and the impacts on species and ecosystems, with a focus on ecosystems of particular interest to humans.

You’ll see fresh detail, and fresh questions, in the panel’s fifth assessment of climate science, which starts rolling out in late September.

Please click here to read the overview of the newly published studies by Godbold and Calosi: “Ocean acidification and climate change: advances in ecology and evolution.”

Here’s an excerpt from the San Francisco State University news release on the laboratory experiment with diatoms:

A year-long experiment on tiny ocean organisms called coccolithophores suggests that the single-celled algae may still be able to grow their calcified shells even as oceans grow warmer and more acidic in Earth’s near future.

The study stands in contrast to earlier studies suggesting that coccolithophores would fail to build strong shells in acidic waters. The world’s oceans are expected to become more acidic as human activities pump increasing amounts of carbon dioxide into the Earth’s atmosphere.

But after the researchers raised one strain of the Emiliania huxleyi coccolithophore for over 700 generations, which took about 12 months, under high temperature and acidified conditions that are expected for the oceans 100 years from now, the organisms had no trouble producing their plated shells. [Read the rest.]

Read the rest of this article on DOT Earth