Knocking back a few oysters (along with beers) at Pearl Dive or Hank’s Oyster Bar is a fine way to end a muggy summer day here in Washington D.C. As I passed by the crowd stuffed into Hank’s last night, I remembered that I’d neglected to share a news item from last month that pertains to our beloved bivalve.

The dispatch is from the Oregon coast, where some of the most delectable oysters grow — or are supposed to. Scientists at Oregon State University have pinpointed a reason for the mysterious die-offs of young oysters in the Pacific Northwest, a phenomenon that threatens the survival of one of America’s prime seafood delicacies.

Pacific oyster larvae, two days old or younger, are among the shellfish most at risk as the oceans become more acidic, according to a study released in a June issue of Geophysical Research Letters. The release of carbon into the atmosphere, caused by humans’ burning of fossil fuels, is in turn adding carbon to the ocean, changing its chemistry and endangering entire marine food webs.

During the first two days of life, an oyster’s prime directive is to build a shell of calcium carbonate to protect itself against predators. To do this, it relies entirely on energy from its own egg, as it has not yet developed the ability to feed.

“They must build their first shell quickly on a limited amount of energy – and along with the shell comes the organ to capture external food more effectively,” said George Waldbusser, a marine ecologist at OSU who was lead author on the study. “It becomes a death race of sorts. Can the oyster build its shell quickly enough to allow its feeding mechanisms to develop before it runs out of energy from the egg?”

The delicate task is complicated on the U.S. West Coast, where the $73 million oyster industry (pdf) is especially vulnerable to the effects of ocean acidification. There, upwellings from the deep ocean — oversaturated with carbon that makes the water especially acidic — regularly rise to mingle with surface water.

Many of America’s favorite seafoods, including mussels, crabs, scallops, abalone and lobster, are at risk for perishing in coming decades as their shells fail to develop properly in more acidic ocean water. The scourge also affects tiny plankton that are the base of the food web that produces prized Alaskan salmon.

On the Oregon coast, adult oysters are not as much under threat, prior studies have found. They have mechanisms that allow them to prosper in spite of large amounts of carbon in the water. Some oyster farms in Oregon have begun adding antacid to the water to create a more favorable environment for the youngest bivalves.

Another stronghold of oyster production, the Atlantic coast from Maine down to Virginia, has so far seen less acidification. But diseases are on the rise as the ocean gets warmer — another consequence of a warming planet.

One prized Oregon variety, the Olympia oyster, has recently staged acomeback after being eaten to near extinction. This tiny species, according toThe Oregonian, has “an earthy flavor with hints of the wild mushrooms growing in coastal forests and finally, a coppery finish.” Hopefully our grandchildren will be able to enjoy such flavors in the abundance that we do. 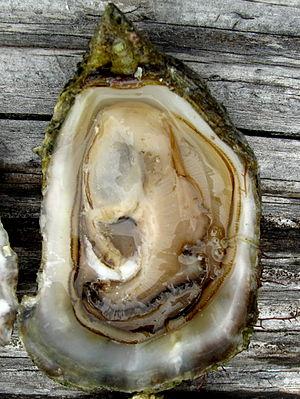 The Olympia oyster, Ostreola conchaphila, has inched its way back from the brink of extinction. What will climate change do to this tasty variety? (Photo credit: Wikipedia)

Read this article in Forbes online.

The Olympia oyster, Ostreola conchaphila, has inched its way back from the brink of extinction. What will climate change do to this tasty variety? (Photo credit: Wikipedia)

Read this article in Forbes online.