Shellfish growers in the Northwest adapt to a changing ocean, treat seawater to maintain chemistry for tiny oyster larvae.

The record high amounts of carbon dioxide being spewed into the atmosphere by humans is causing more than global warming and changes across the land. The ocean absorbs CO2 in a natural part of the carbon cycle, but since the industrial revolution and human fossil fuel burning began, a great deal more has been absorbed than in centuries past. NOAA says that when carbon dioxide is absorbed by seawater, chemical reactions occur that reduce seawater pH, carbonate ion concentration, and saturation states of biologically important calcium carbonate minerals. These chemical reactions are termed “ocean acidification.” Calcium carbonate minerals are the building blocks for the skeletons and shells of many marine organisms. Historically, the average pH of seawater around the globe is 8.2. Since the industrial age began, the average pH of surface oceans has decreased to 8.1, a 30% increase in acidity. This change is beginning to affect all ocean creatures which build shells, including reef-building corals which are already under stress from ocean warming. Especially affected are plankton, the tiny plants and animals at the base of the ocean food chain, including the larvae of shellfish. In the Pacific Northwest, the oyster industry, with an $84 million yearly value and employing 3,000, is already seeing and reacting to the effects of unhealthy ocean water. 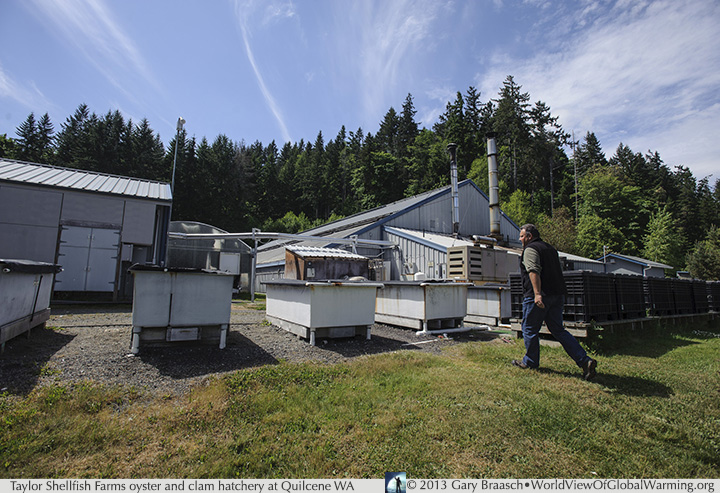 On Dabob Bay, across Puget Sound from Seattle on Hood Canal near Quilcene Washington, is the oyster hatchery of Taylor Shellfish Farms. Water is drawn from the cold Puget Sound water for the oysters, clams and the algae grown at this facility. Water pollution had been the greatest concern here until recently. Now ocean uptake of human CO2 emissions has increased the acidity of seawater and decreased the amount of available calcium carbonate that shellfish need to grow and keep their shells. The hatchery has just begun treating the incoming water to maintain the optimum pH and carbonate chemistry for their oysters. 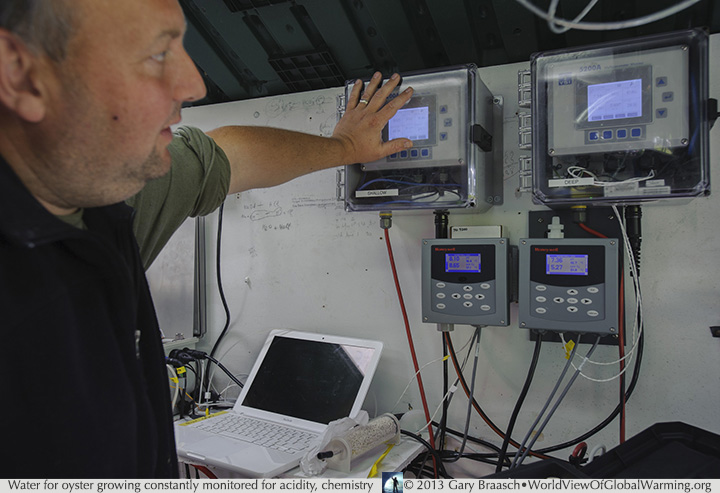 Hatchery Production Manager Benoit Eudeline checks the water chemistry monitors at Taylor Shellfish Farms hatchery on Hood Canal, Puget Sound, Washington. The hatchery draws water from deep and shallow intakes. In the past, deep water was better, colder, less polluted. Now, the more immediate danger of acidification and resulting changes in the carbonate chemistry has caused the hatchery to draw more water from 3-4 feet deep shallower water, which is usually more alkaline. The newly installed monitors show the pH of seawater being pumped on the day these photos were made (May 20, 2013) to be pH 7.35 in the deep water and pH 8.1 in the shallower water. Historically, the average pH of seawater around the globe is 8.2. Since the industrial age, the average pH of surface oceans has decreased to 8.1, a 30% increase in acidity. The water here is continuously monitored for concentration of CO2, alkalinity, pH, temperature and carbonate chemistry levels. The hatchery strives to maintain a pH of 8.0 and optimum carbonate chemistry for raising oysters from the egg stage to young oysters ready to plant in beds. To do so, for the first time this year, Eudeline’s staff treats the more acidic seawater with sodium carbonate as it enters the hatchery. 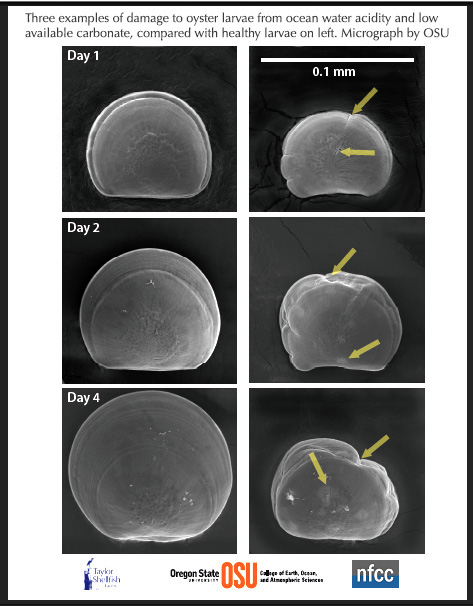 In these scanning electron microscope images by Elizabeth Brunner and Dr. George Waldbusser of Oregon State University, Pacific oyster larvae from the Taylor Shellfish Hatchery are shown affected by acidic, unfavorable chemistry of ocean water (right) compared to healthy larvae of the same age raised in favorable water chemistry. The scientists say the images show signs of impaired shell growth, defects, and creases and suggestions of the shells being dissolved. From the very first day of their life, oysters begin to build shells using just the energy in their yolks, and that can be inhibited by acidity and cause the shell buiding may fail.

The first few days of growth are crucial, Waldbusser told news media: “They must build their first shell quickly on a limited amount of energy–and along with the shell comes the organ to capture external food,” said Waldbusser. The unfavorable ocean water has high amounts of pCO2 (determined by dissolved CO2 and carbonic acid), and low concentration of aragonite, the kind of calcium carbonate used by shellfish to grow their shells. Such water conditions occur at Dabob Bay, home of the Taylor hatchery and Netarts Bay, OR, where the Whiskey Creek Shellfish Hatchery is located. Whiskey Creek was a close collaborator in recent research by Waldbusser, Brunner and colleagues, showing how oysters are affected by ocean changes brought on by CO2 emissions.

(NOTE: each larva shown is a different organism, and should not be interpreted as the same larvae ageing through time. The scale bar in the upper right panel is 0.1 mm, or approximately the diameter of a human hair.) Photo courtesy Taylor Shellfish from OSU. 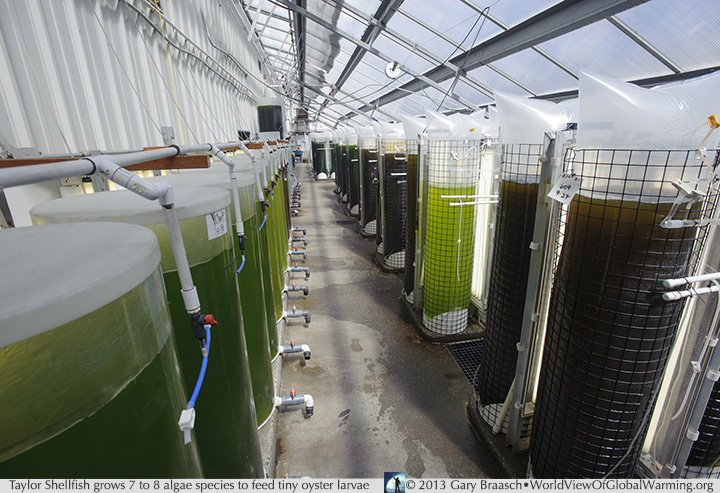 Taylor Shellfish Farms hatchery on Hood Canal, Puget Sound, Washington, grows seven to eight different species of algae, also in water treated for the correct chemistry, to feed the oyster larvae as they develop. The oysters begin as fertilized eggs and grow for about three weeks into tiny oysters ready to find a home – to settle — on the company’s beds in Washington and Hawaii. 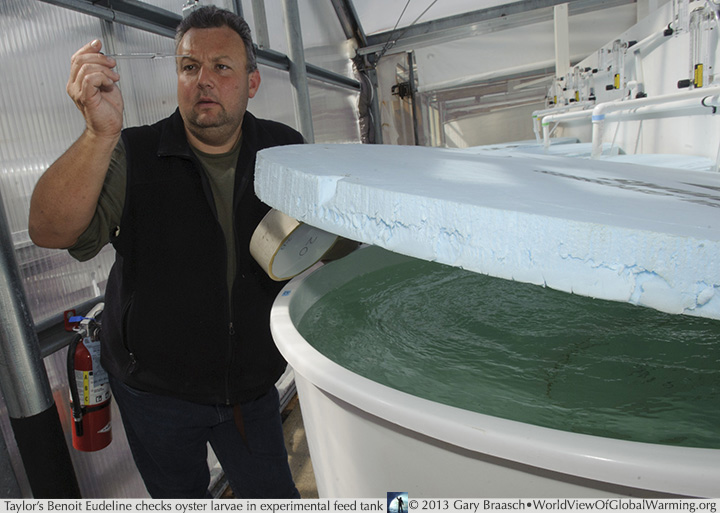 Benoit Eudeline checks on the growth of oyster larvae in an experiment using different kinds of algae for food. All the algae and oyster larvae tanks are filled with water treated to combat acidification. Taylor Shellfish Farms hatchery on Hood Canal, Puget Sound, Washington. 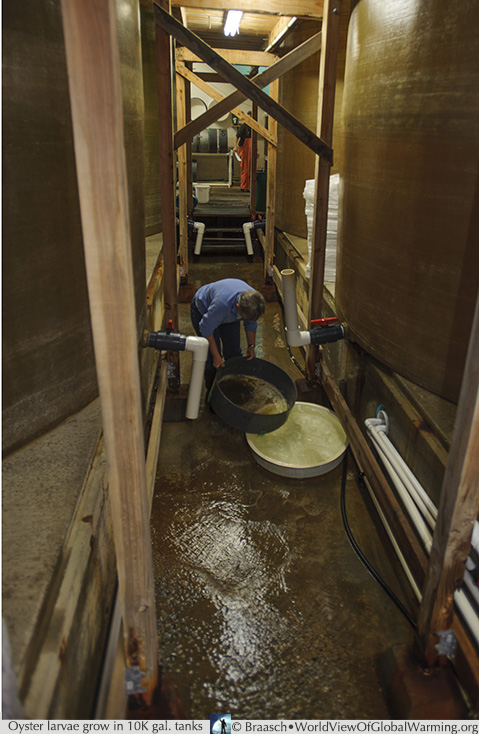 A row of 10,000 gallon tanks are filled overnight with more than 1 billion oyster eggs from the spawning of selected oysters at Taylor Shellfish Farms hatchery on Hood Canal, Washington. The fertilized oyster larvae are pumped into the giant tanks shown here which are filled with seawater treated with carbonate and containing algae, the oysters’ food. The oyster larvae begin immediately to make shells within their first 24 hours increasing from from microsopic (see photo 3) to about 300 microns, about half to one third size of a newspaper period, in about two weeks. “Since the very early larvae are making shell from aragonite (calcium carbonate) and they must go from no shell to a shell within 24 hrs,” hatchery manager Benoit Eudeline says, “the first few days are critical” — thus the need for treating the water to counteract acidity and low carbonate saturation. 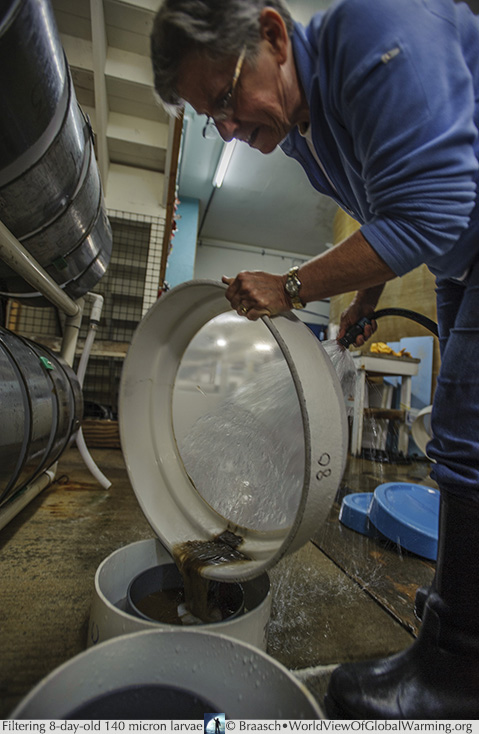 Chief larval technician Vicki Jones filters oyster larvae from the giant rearing tanks at Taylor Shellfish Farms hatchery in Washington. The mesh screen she is using catches eight day old oysters that are roughly 140 microns (about the width of a human hair) and larger. Some of these younger larvae are being shipped to Kona, Hawaii, where they will be grown until ready to settle on beds at that Taylor facility. Other young larvae will continue to grow for another one to two weeks at this hatchery. 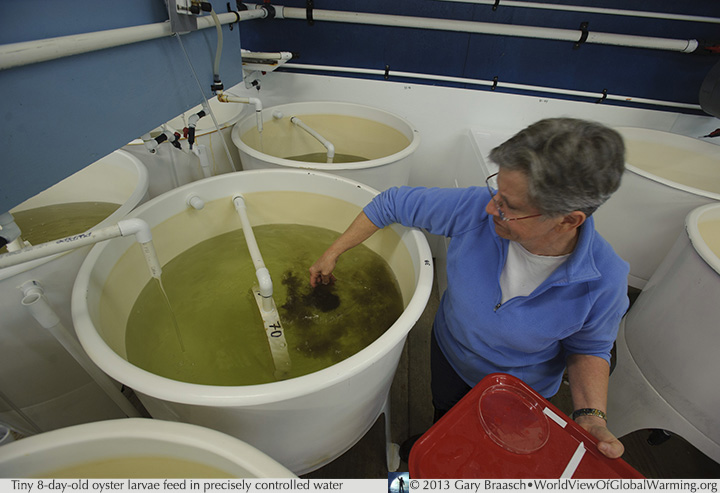 Taylor Shellfish has been experimenting with continuous flow tanks for growing the oysters from eggs to tiny shellfish ready to be settled on oyster beds in the bay. Instead of very large tanks, the oyster larvae — looking like silt being poured into this tank — are in smaller tanks in which measured quantities of algae food and water treated to the optimum pH with calcium carbonate are continuously circulated. 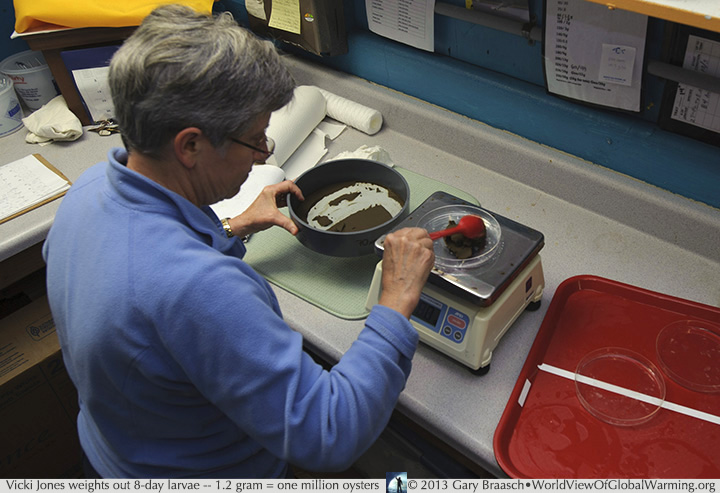 Chief larval technician Vicki Jones weighs out drained oyster larvae which looks like mud because the individual oysters are nearly invisible like silt and they have taken on the color of the algae they eat. At this stage of growth, about eight days old, there are about one million larvae in 1.2 grams of the material. Bags of larvae in this state are trucked and Fed Ex shipped to Taylor Shellfish Farms oyster beds in Washington and Hawaii. 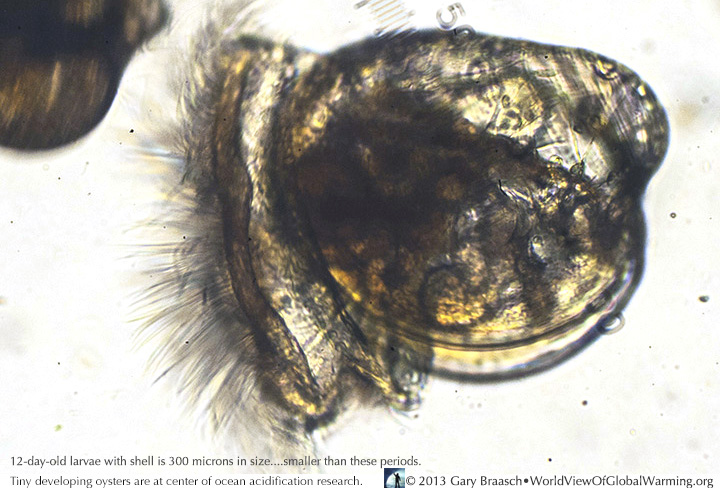 Seen through a microscope, a healthy 12 day old oyster larvae, with its cilia for motion and gathering in algae to eat and form its tiny shell, has the color of the algae it has been eating. Acidification and reduction of saturated argonite (calcium carbonate) in the ocean due to CO2 emissions can inhibit shell growth in these tiny (300 micron) animals. When they are slightly larger they are ready to take a fixed position on a substrate like shell fragments on commercial oyster beds.