Posted on PhysOrg: April 12, 2013 — By Hannah Hickey — A row of space-age domes off the Washington coast may provide a peek at the future. Not the future of space travel, but of climate change and the effects of increasingly acidic oceans. 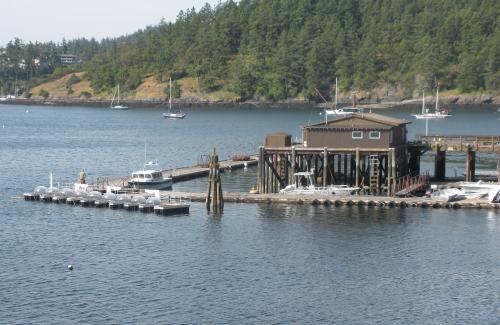 The nine test tanks, on the left, attach to the main dock at the UW’s Friday Harbor Laboratories on San Juan Island.

A University of Washington class is using the nation’s first controlled-ocean research tool to study the effects of increased acidity on marine ecosystems. “The goal is to study the impact of ocean acidification on biological community structure in seawater from the San Juan Islands,” said James Murray, a UW oceanography professor. On the main dock at the UW’s Friday Harbor Laboratories until April 29 the team will start at 8:30 each morning by lowering bottles six feet (two meters) into each reservoir to collect water samples. Students enrolled in a research apprenticeship class then analyze the seawater to see how acidity affects chemistry, bacterial communities, and marine animal and plant life. “The biological impacts of ocean acidification are the big unknowns,” Murray said. “We know that CO2 is going up, and we know that the oceans are going to be more acidic, but what we don’t know, and everyone is concerned about, is the possible impact on the biology.” Enlarge Credit: Jim Murray / UW Murray led development of the experimental facility over the past five years with funding from the Educational Foundation of America and the National Science Foundation. In recent years the group has worked out some tweaks – adding floats to each reservoir to keep from straining the dock, and shading the covers to slow down biological blooms in the reservoirs. This is the first spring that the reservoirs will be used to carry out experiments, launched April 9, to simulate more acidic oceans. Four faculty members, four technicians and two teaching assistants will help the students perform chemical tests, conduct microscope analyses and do simple genetic tests of biological diversity on the seawater. Ads by Google Creative Writing Courses – Creative Writing for Entertainment. Online Degree Programs. Mobile Info – www.FullSail.edu The reservoirs, called mesocosms, are water enclosures that provide a controllable section of the natural ocean. They allow researchers to conduct studies that are midway between a controlled lab test and an open-ocean experiment. The Friday Harbor structures are 18-foot-tall plastic bags that hang from metal rings. For two days seawater near the dock was coarsely filtered to remove jellyfish and other large pieces of marine life before gradually filling the bags. Each bag holds 3,000 liters (790 gallons), enough water to fill more than 35 bathtubs. Three of the bags stay at the natural acidity, the other six have carbon dioxide pumped inside to increase acidity to the levels projected under climate change. “This experiment is a way to look at all interactions between the components of the food web, including some of the more complex biological interactions that happen in the real ocean,” Murray said. The acrylic domes are actually loose covers that prevent seagulls or other debris from landing in the tank. The UW aquatic mesocosm was modeled after similar structures to study ocean acidification in Bergen, Norway, and Pohang, South Korea. Researchers from both countries are also involved in the experiments this spring at the Friday Harbor facility. Korean scientists are interested in dimethyl sulfide, the chemical that helps give ocean air its characteristic smell. The concentrations of this gas may differ under climate change, and some scientists believe it plays a role in cloud formation. “This year’s experiment has gone really smoothly so far, and I think we’re on track to have some interesting results,” Murray said.

Provided by University of Washington