In April 2010, The Santa Barbara Independent published an in-depth cover story on ocean acidification, becoming one of the first general interest publications to explain how our planet’s 200-year addiction to burning fossil fuels is dramatically increasing the toxicity of the seas. Nearly three years later, despite much more media attention, lots of government funding, and repeated warnings from scientists, the everyday earthling still has very little clue how much trouble we are almost certain to face in our lifetimes when the oceans’ rising acidity decimates the marine system as we know it, putting the supply of seafood at risk, among other global impacts.

But the public may be starting to pay attention, thanks to our collective love for oysters, as the popular slurpable shellfish is emerging as the canary in the acidification coal mine. “Oysters are the first things being affected that have a spokesman for them,” said Bill Dewey, who will speak at the Edible Institute this weekend and had the BBC and USA Today coming to visit his farm last week. “The science is irrefutable. Hopefully people start paying more attention.” 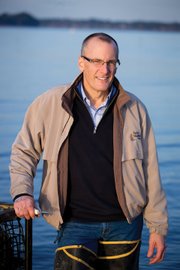 A longtime Washington state aquaculturist, Dewey started noticing problems in those seas in 2006, when some oysters were unable to reproduce. Scientists first attributed the problem to bacteria, so boatloads of money were spent on addressing that, yet the woes remained. “We realized we had a bigger issue,” said Dewey, who then heard the leading acidification researcher talk at the annual shellfish conference in 2008. “It was a sobering talk for everybody. It was a pretty grim message.”

Since then, and thanks to government funding, Dewey and other oysterers have installed weather warning systems that inform them when the bad waters will arise (the high acidity stuff tends to be down low and rustled up by wind), and that’s helped. But the toxic waters are only on the rise.

“We are radically changing the acidity of our oceans,” said Dewey, who explained that burning fossil fuels have upped the pH level by 30 percent in the last 200 years, with a 150 percent change on tap by the end of this century. “It’s a very big experiment that we are going to see the results of in our lifetime.”

Until then? Slurp up!