Posted on PBS NewsHour: 5 Dec 2012 — BY SASKIA DE MELKER — The world’s ocean are absorbing carbon dioxide at an unprecedented rate and the resulting acidification is already altering marine ecosystems. We look at how ocean acidification is affecting shellfish and coral reefs.

Slip beneath the water’s surface and you’ll find a world teeming with life. Schools of yellowtail fish dart through colorful coral reefs. Spiny lobsters emerge from the crevices of ocean rocks searching for a tasty meal. And sea anemones nestle in the nooks of oyster beds.

But there is trouble in the world’s ocean.

“Over the last 200 years, 550 billion tons of carbon dioxide have been absorbed by the oceans,” said Richard Feely, a senior scientist at the National Oceanic and Atmospheric Administration. That’s enough carbon dioxide to fill enough train cars to wrap around the world seven times each year.

Feely, one of the world’s leading researchers on ocean acidification, has been studying this uptake of carbon dioxide for the last 30-some years. Feely and other scientists once saw an upside to the ocean acting as a carbon dioxide sink: it kept the greenhouse gas out of the atmosphere. But over the last two decades, they’ve discovered that it’s having an unprecedented effect on the chemistry of the oceans.

Carbon dioxide decreases the pH of the water. The lower the pH, the higher the acidity. Oceans have acidified by 30 percent from pre-industrial levels, and scientists expect that number will climb to 100 percent by the end of this century.

“Ocean life had not seen a significant change in pH for 800,000 years or more, saidSarah Cooley, a chemical oceanographer at the Woods Hole Oceanographic Institution.“So marine life has been accustomed to conditions being consistent, and what we’re doing is we’re changing the game significantly.”

Slight changes in pH levels can have dramatic effects. Consider this: the pH of the blood running through your arteries is between 7.35 and 7.45. A drop of .2 pH units can cause seizures, heart arrhythmia or even send a person into a coma.

“That change in direction toward more acidic conditions is very important to your biological systems,” Feeley said. “It’s the same thing for many marine organisms.”

We can already see ocean acidification at work in the oceans. In recent years, oyster larvae on the northwest coast have been dying off by the billions. The seawater is so corrosive that it eats away at the young oyster shells before they can form.

Renee Carlton of NOAA’s Coral Health and Monitoring Program, compared the effect that acidification has on marine mammals to osteoporosis, which causes brittle bones in humans. As acidity increases, animals like scallops, oysters, and clams have a harder time extracting the calcium carbonate they need to build their essential shells. Shells become thinner, growth slows down, and death rates rise.

For coral reefs, the challenges presented by increased carbon dioxide are even greater.

Reefs are extremely sensitive to both warming and acidification.  High water temperature causes corals to ‘bleach’ or expel the colorful algae that live in their tissue, exposing their skeletons. When pH dips, they have a harder time generating sturdy skeletons, and evidence shows that it’s harder for corals to reproduce when the ocean acidifies.

“If a coral dies, there is less likelihood that a baby coral is going to be able to replace it in the future,” said Chris Langdon, a coral biologist at the University of Miami. He has been conducting lab experiments to see how corals will cope with future conditions and found that the one-two punch of carbon dioxide and warmer waters aggravate their effects on the reefs. “That means that the corals can show signs of bleaching at a lower temperature than they would have before the increased carbon dioxide,” Langdon said. 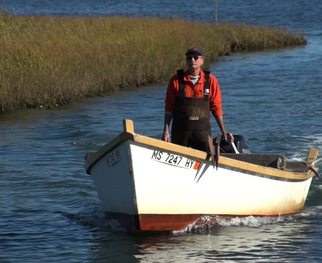 Expert Profile: Sarah Cooley with the Woods Hole Oceanographic Institution explains how ocean acidification works and what it means for New England shell-fisherman.

This leaves the animals more vulnerable to disease, pollution, and predators. And that has cascading effects for the rest of the ecosystem, all the way up to human communities, said Paul McElhany of NOAA’s Northwest Fisheries Science Center studies the effects of acidification on marine species.

Shellfish and corals are the foundation of marine ecosystems. Reefs provide habitat for thousands of other animals, and more than a quarter of all fish live in coral reefs at some point in their lives. And many shellfish are at the bottom of the marine food chain and are eaten by fish and other animals.

“We’ve seen that these increases in acidification can really reorganize these food webs, both directly and indirectly,” McElhany said, adding “What happens in the marine environment is likely to affect you.”

NewsHour will air these two reports about ocean acidification’s impacts on coral reefs and shellfish this week.
Reporting contributed by Heather Goldstone of WGBH and Katie Campbell of KCTS9.