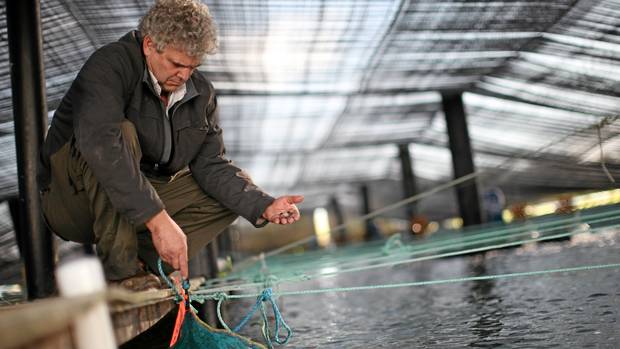 For more than two decades, Rob Saunders grew his shellfish larvae in ordinary seawater drawn from the pristine natural environment of Baynes Sound, one of the most productive shellfish farming areas on B.C.’s West Coast.

Now the water in Baynes Sound is so acidic, Mr. Saunders’ fragile seed stock will die unless he artificially adjusts the PH level in his hatchery tanks.

“Because of ocean acidification the only way we can grow any larvae – oysters, clams, mussels, geoducks, you name it – is to take the CO2 out of the seawater,” said Mr. Saunders, CEO of Island Scallops, the largest producer of shellfish seed stock on province’s West Coast.

“We would have been out of business this year if we didn’t figure out how to solve the problem.”

Ocean acidification, a worldwide phenomenon linked to global warming, was identified as a serious threat to the shellfish industry in Oregon and Washington state five years ago.

Caused by the absorption of excess CO2 from the atmosphere, ocean acidification lowers ocean PH levels and reduces the concentration of calcium carbonate, a key building block of seashells and other marine skeletons.

Mr. Saunders is currently taking part in a two-year, $250,000 study of pH levels in the waters between Denman Island and Vancouver Island, about 20 kilometres south of Courtenay.

Funded by the federal Department of Fisheries and Oceans, the study involves rigorous daily testing using an infrared gas analyzer to detect ocean carbon dioxide. DFO officials refused to discuss data that has been gathered so far, saying preliminary results won’t be made public until sometime next spring.

However, Mr. Saunders said there’s no doubt that acidification is affecting the survival of shellfish larvae.

“We grow them under different concentrations of CO2 to see how they live and die,” he said. “And they die if we use the ocean water. Period.”

The changes are not yet severe enough to affect bivalves that have already formed their shells, he added.

“It’s a complex issue that could have major repercussions for the west coast shellfish industry, but it’s only come to our attention in the last few years,” said Brian Kingzett, manager of the Deep Bay facility. “We’re just beginning to study it.”

Ocean acidification began taking a toll on the shellfish industry in Washington state and Oregon in 2005, when naturally occurring larvae all but disappeared from oyster-rich estuaries such as Willapa Bay and Dabob Bay on the Hood Canal

Bill Dewey, spokesman for Seattle-based Taylor Shellfish said producers who used to rely on “natural recruitment” have been forced to seed those areas with hatchery-raised larvae mature enough to withstand the ocean’s altered pH levels.

“We had periods of a couple of years in the past when it was bad, but to have it for seven years in a row is unprecedented,” he said.

Taylor, the largest producer of farmed shellfish in the U.S., owns Fanny Bay Oysters in Baynes Sound and several other B.C.-based shellfish farms.

Oyster production in the Pacific Northwest dropped by 60 per cent in 2008 and 80 per cent in 2009, but bounced back over the past two years, due mostly to intensive “seeding,” Mr. Dewey said.

The excess carbon dioxide that causes acidification is often trapped in seawater 15-30 metres below the surface. Scientists have yet to pinpoint what causes “corrosive” water to rise to the surface, but storms, ocean currents and temperature changes are believed to be factors, Mr. Dewey said.

Most scientists agree the source of the CO2 is billions of tonnes of carbon dioxide that has been released into the atmosphere due to human activity since the industrial revolution.

A 2010 study by researchers from the University of Bristol, England, concluded that ocean acidification today is occurring 10 times faster than it did 55 million years ago when a mass extinction of bottom-dwelling marine life occurred.

At the current rate of change, scientists predict that oceans could become acidic enough to dissolve the shells of some marine animals as early as 2050.

Roberta Stevenson, executive director of the B.C. Shellfish Growers Association, said ocean acidification made many producers think twice about expanding their operations and cast doubt on the industry’s future.

“It’s pretty scary to be investing in an ocean that will potentially no longer support shellfish farming,” she said.

Special to The Globe and Mail