Posted from WRIInsights — WRI releases Climate Science 2009-2010, the latest installment in our periodic review of the state of play of the science of climate change. 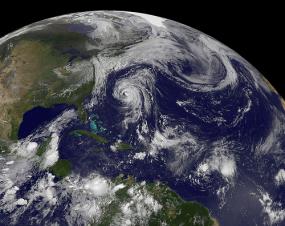 Today, WRI releases Climate Science 2009-2010, the latest installment in our periodic review of the state of play of the science of climate change. Co-authors Kelly Levin and Dennis Tirpak describe some of the latest climate science developments.

What is the Climate Science series?

The Climate Science series summarizes research highlights from the latest climate change science, from leading universities and laboratories. We have been writing the review since 2005. While not comprehensive, it aims to review scientific breakthroughs that have significant implications for communities, ecosystems, and the advancement of climate science more generally.

We think it’s important to review the most recent science findings on climate change for a few reasons. First and foremost, it’s helpful for policymakers, businesses, and the public to have an up-to-date picture of how the climate is changing and how scientists think it will change in the future. Also, the Intergovernmental Panel on Climate Change last came out with its assessment report in 2007, and the next one is due in 2013/2014. This review helps track scientific progress in the interim. We have tried to make the science more accessible by summarizing not only the research methods and findings but also the implications of the research.

What are the key findings of this scientific review?

We divide up the report according to changes to physical, hydrological, and ecological systems, as well as advances in technologies. As a whole, the literature paints a bleak picture. We are continuing to see accelerating change in many systems, with some changes happening much faster than initially envisioned.

Some of the key findings:

What are some of the main areas in which scientists are making progress in advancing our understanding of climate change?

We found that there is new and abundant literature on four topics: climate feedbacks where the literature generally suggests positive feedbacks from many different processes, triggering an acceleration of climate impacts; sea level rise where the evidence indicates that previous estimates of sea level rise are likely to be revised upward; ocean acidification where new science is confirming the potential global implications of an ocean that is already 30 percent more acidic than about 100 years ago; and on climate impacts to ecological systems, where the literature base now provides more evidence of changes to a variety of species, including lizards, tigers, and butterflies.

Is there anything that surprised you about the research covered in this report?

In light of all the bad news about climate change, a surprise would have been to find out that we are much better off than we thought. But for the most part, we’ve seen impacts around the world in line with – and in many cases worse than – projections.

There are two stories that particularly stand out. First, recent literature (Yin et al.) suggests that sea level rise will likely not be even around the globe. In other words, sea level rise does not occur just like water being added to a bathtub. As a result, the northeast coast of the United States may be especially affected by changes in sea level due to changes in ocean circulation.

The latest research (Francis et al. and Petoukhov et al.) also suggests that recent “winter weather” experienced in temperate Northern Hemisphere could be connected to climate change. As winter sea ice cover in the Arctic Ocean disappears, it can create a pressure and temperature gradient that sucks heat out of Europe. Therefore, recent extreme winter weather is not inconsistent with increases in global average temperature.

What lessons will readers take away from this report?

There are two main lessons. First is the urgent need to proceed with mitigation – with rapid and deep cuts in greenhouse gas emissions. One of the papers we covered (Allen et al.) shows that models indicate that cumulative total anthropogenic (human-caused) carbon emissions need to be limited to one trillion tons if global average temperature rise is to remain below 2°C, the current long-term goal agreed to by the international community in the UNFCCC Cancun Agreements. And we have already emitted half of that amount (by 2060 we will have emitted the other half, and would need to immediately eliminate all carbon dioxide emissions after that date to limit warming to 2°C).

The other main lesson is that we need to enhance our capacity to adapt to climate change’s impacts. What we see already from the literature is a rapidly changing world, throughout physical, hydrological, and ecological systems. Even if we were to stabilize concentrations of greenhouse gases today, we’d still see warming, due to the heat trapping capacity of the oceans, and resultant impacts. We will need not only to be able to respond to extreme events but also proactively prepare for heightened variability and long-term change.

What’s next for climate science?

The next major milestone for climate change science is the Fifth Assessment Report of the Intergovernmental Panel on Climate Change. This report, produced by the world’s leading scientists, will present the next “state of knowledge” of climate science since the Fourth Assessment Report was published in 2007. It will be a bit different from previous assessments, with greater emphasis on describing climate impacts to regions, communicating risks and uncertainties, and exploring socio-economic aspects of climate change and its impacts, among other changes. The reports will be published over the course of 2013-2014. In the meantime, the Intergovernmental Panel on Climate Change is also publishing a special report on“Managing the Risks of Extreme Events and Disasters to Advance Climate Change Adaptation” later this fall.

View our slideshow of climate change impacts around the world >>>

Read the entire report at   insights.wri.org