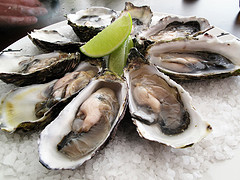 She’d start with hundreds of millions of oyster larvae in the tanks at the Whiskey Creek Shellfish Hatchery in Netarts, Oregon. Only a handful would make it.

Sometimes, they’d swim for a couple of weeks. But they’d stop developing before they grew a critical shell structure, or maybe the foot or eyespot. They’d feed poorly. One day, the larvae would simply die. A hatchery that has supplied seafood businesses for three decades had virtually nothing to sell for months, said Cudd, who owns the hatchery.

Read the rest of the article here.